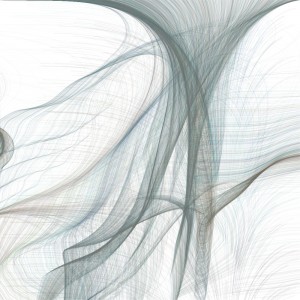 Digital poetry is that part of literature which is concerned with poetic forms of expression which are mainly computer aided. I am using the term in a strong sense here, i.e. I am thinking about generative poetry, hypertext poetry, and for this occasion in particular digital visual poetry. In general, the relation between the (graphical) sign used to represent a word and its actual meaning in a poetic text is a very interesting (and crucial) one. Indeed, the way words are represented can be an integral part of the aesthetic value of a piece of literary text, poetry in this case. Just think about the beautiful art of Chinese calligraphy, for example. It is then not surprising that poetry, as many forms of digital art, can be glitched* too. I have written about glitch art already, and we can use a couple of ideas and methodology from there. One way to glitch a piece of poetry would be to introduce orthographic anomalies/errors in the text to get for instance something like**

At this stage we are working mainly with the signifier, but in a way which doesn’t take into account the actual spatial representation of the text itself. (Yes, the text is actually represented already, I’m being a bit sloppy here.)
More in the direction of digital visual poetry, we can work with properties of the visualized text: the position of the actual characters involved, for instance. The graphical atoms will be then the characters forming the words in the text, in this case, and we introduce perturbations to their positions in space, and some other visual artifacts. To achieve this, we can regard the various lines of text, which are of type String, as array of characters, and display them. We have then to take care of the length in pixels of each character with the function textWidth(), in order to be able to display the various lines of text.
Here’s how a simple Processing code inspired by these ideas would look like: 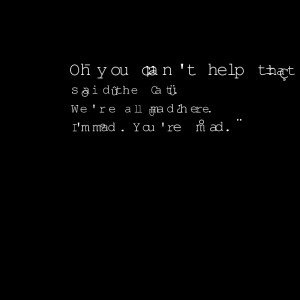 I have been lazy, and introduced the array of strings directly in the code: an easy (but instructive) variation would be to load a piece of text from a .txt file, and parse it to obtain the individual lines.
Finally, we could work at a third layer of graphic “deepness”: we could consider the whole text as an image, and use the ideas in the previous post to glitch it. This is left to you as an interesting exercise.
Most importantly: never contradict the Cheshire Cat, mind you. 😉

*I avoid using the term “hacked”, since nowadays it is practically and culturally meaningless. Someone suggested “hijacked”, which I prefer.
** Thanks to Kerouac for the raw material to esperiment with.

On the poetics of artistic suicide

I have not updated this blog in several months now: various reasons, some more personal than others, have taken a role in this. I felt though the strong need to write again here.
No, I won’t show any code this time. Simply because there is no algorithm for the kind of artistic pieces I want to point your attention to.
Rather, I want to talk about what I consider one of the greatest performance acts of recent years. Italian street artist Blu has recently erased all the murals he had created in his very own city of Bologna during the last twenty years. The manifesto and the words explaining the reasons behind this decision have been left to Wu Ming, a collective of writers active since the mid ’90s.
You can read everything here. (There is an english translation as well.)
In an impressive act of artistic suicide, at the same time creative and destructive, aesthetic and poetic, Blu has reminded us that art has still the power to challenge and raise questions concerning urbanism, commonalities, public spaces, recuperation, power.
By subtracting those walls to a since too long ongoing process of cultural and economic reappropriation by a repressive establishment, he has left big “grayboards” for all to take part in the everyday struggle for freedom. The brush is in our hands, and it’s leaking.
These phenomena of reappropriation are not particular to street art.
“Coding”, the topic of this blog, is nowadays a buzzword everyone wants to pronounce. A piece of cake shot with low depth of field and Instagram filter everyone wants to taste. The latest golden egg chicken, or whatever. With various blogs and online magazines feeding you the latest technological wonders and the new emergent trends in this or that artistic field, where has the sense of exploration gone? How can we bring it back, and make it challenging once again, freeing it from the multiple petty boxes the corporate machine wants us to frame it?
Can we bring digital art “in the streets”, or will it always be confined to our smart and self-reassuring conventions and gatherings?

After a few hours from its repainting, the following writings have appeared on one of the gray walls left

For a little while, we had a glimpse of a Blu sky.